The Best Things to Do in NYC in April

April is brimming with culture in NYC. A new exhibit on Studio 54 comes to Brooklyn Museum, The New York Botanical Garden hosts its popular annual Orchid Show, the New York International Auto Show returns to the Javits Center, jewelry fans flock to the Museum of Arts and Design for its annual LOOT shopping event, and much more!

Things to Do in New York in April: Exhibits (Now-7/5) Studio 54: Night Magic. It’s hard to believe that Studio 54, the mecca of the disco era, lasted just 3 years. After its opening on April 26, 1977, the legendary midtown club quickly achieved iconic status. Celebs from Andy Warhol to Farrah Fawcett flocked to this outrageous and exuberant party scene. By February 1980, the club was shut down, but its legacy remains vital 40 years later. A new exhibition at the Brooklyn Museum, Studio 54: Night Magic uses photographs, drawings, film, and fashion to document how this nightclub came to reflect a particular moment in the cultural history of New York City. The exhibition design parallels that of the club itself and features a soundtrack of disco hits like Chic’s “Le Freak” and Gloria Gaynor’s “I Will Survive.” (Now-4/19) The Orchid Show: Jeff Leatham's Kaleidoscope at The New York Botanical Garden. The 18th annual Orchid Show will feature the dazzling floral creations of Jeff Leatham, the famed artistic director of the Four Seasons Hotel George V, Paris and floral designer to the stars. Leatham’s bold and colorful vision will unfold through captivating installations transforming each gallery in the historic Enid A. Haupt Conservatory into a different color experience, like a turn of a kaleidoscope. See dramatically arranged orchids in arches of deliberate hues delivering a tunnel effect, along with other design surprises featuring thousands of orchids—both rare and iconic—from the garden’s renowned collections and the finest growers in the world. nybg.org (Now-5/18) The International Center of Photography recently moved into the Lower East Side's Essex Crossing at 79 Essex Street. There are four new exhibits running at the same time-Tyler Mitchell: I Can Make You Feel Good, which explores ways to interpret Black identity in a positive light; Contact High: A Visual History of Hip-Hop, featuring a collection of portraits of some of the biggest names in hip-hop back from past to present including Notorious B.I.G., and others; Lower East Side: Selections From the ICP Collection, and finally James Coupe: Warriors, using the cult classic 1979 film to explore contested notions of community, race, gender, and class in the 21st century. (Now-8/23) Bill Graham and The Rock & Roll Revolution at the New-York Historical Society. Delve into the world of Bill Graham (1931–1991), one of the most influential concert promoters of all time. Bill Graham and the Rock & Roll Revolution explores the life and work of the legendary music impresario who worked with the biggest names in rock music—including the Grateful Dead, Jefferson Airplane, Jimi Hendrix, Santana, Led Zeppelin, and the Rolling Stones—and launched the careers of countless music luminaries at his famed Fillmore Auditorium in San Francisco and the Fillmore East in New York City. Unique to New-York Historical is a special, immersive audio experience, providing a musical tour through the exhibition with songs by rock superstars Aerosmith, Blondie, David Bowie, Cream, the Doors, Janis Joplin, Tom Petty, and Neil Young, among others.

(Permanent) The Jim Henson Exhibition at the Museum of the Moving Image celebrates the life and legacy of the famed Muppet creator, exploring both his prolific career and the enduring effect his work has on pop culture to this day. Visitors will learn more about the creation of such beloved works as The Muppet Show, Sesame Street, Fraggle Rock, The Dark Crystal, and Labryinth, as well as discover the cutting-edge experimental works Henson made throughout his career. (4/20-4/26) LOOT: 2020 at the Museum of Arts and Design. Now in its 20th edition, LOOT presents a cross-section of the most exciting cutting-edge art jewelry designs while offering the public a rare opportunity to meet and acquire pieces directly from some of the most skilled creators in the field. Opening night is a benefit.

Things to Do in New York in April: Comedy (4/24-4/25) Chelsea Lately star and author of Has Anyone Seen My Pants Sarah Colonna at Gotham Comedy Club.

Things to Do in New York in April: Kids (4/12) Easter in New York brings egg hunts, fine brunches, and a bonnet-filled procession down Fifth Avenue that's been a city tradition for nearly a century and a half. Celebrate the holiday in true New York fashion with a trip to the Easter Parade. The tradition dates all the way back to the 1870s, when upper class New Yorkers would stroll down Fifth Avenue after church and show off the fashionable new outfits they’d purchased for the holiday. Traffic shuts down for the parade on Fifth Avenue between 49th and 57th Streets from 10am to 4pm on Easter Sunday, letting festive paradegoers fill the streets in their elaborate Easter finest. (4/18-4/19, 4/25-4/26) Apple Blossom Children's Carnival at Queens Farm. Put the Spring in your step down on the farm. Tilt-A-Whirl in our orchard and kick off the season with children’s carnival rides, midway games & hayrides. Ticket includes admission to the farm grounds, unlimited carnival rides and kids crafts at the Con Edison Ecology booth.
The Apple Blossom Children's Carnival is recommended for ages 2–12. One ticket price for all ages (adults and children). Additional fees apply for hayrides, pony rides and seasonal petting zoo. Food vendors will be at the farm all day. 11am-6pm. Tickets $15 advance, $20 all ages.

For more kids things to do, visit our sister site at nymetroparents.com!

Things to Do in NYC: Food, Music & Nightlife (4/3-4/4, 4/10-4/11, 4/17-4/18) Orchid Evenings at The New York Botanical Garden. Lose yourself in twists and turns of color as the garden hosts adult-only “Orchid Evenings.” Explore famed designer Jeff Leatham’s colorful Orchid Show, a kaleidoscopic display of dazzling flowers, while accompanied by performances, signature cocktails, and local flavors from the Bronx Night Market. (The garden is just a 20-minute Metro-North ride from Grand Central Terminal.) (4/15) Lukas Nelson and Promise of The Real at Brooklyn Steel.

(4/17-4/18) NYC Craft Beer Festival at The Weylin Building in Williamsburg.

(4/18) The Dandy Warhols at The Music Hall of Williamsburg.

(4/29) Niall Horan, with Lewis Capaldi, and Fletcher: Nice to Meet Ya Tour at Barclays Center.

Things to Do in New York in April: Sightseeing (4/25-4/26) The Sakura Matsuri Cherry Blossom Festival at the Brooklyn Botanic Garden. This beloved cherry blossom festival will be celebrating its 39th anniversary this year. Sakura Matsuri incorporates both modern and traditional Japanese culture, and it offers the perfect opportunity to check out the garden’s famous Cherry Esplanade. bbg.org

Things to Do in New York in April: Ongoing Bring a loved one to take in the breathtaking view at Top of the Rock.

(ongoing) Ride 102 stories to the top of the One World Observatory in less than 60 seconds!

Visit the sites of Friends, Seinfeld, Trainwreck, Gossip Girl, Sex and the City and many other NYC film sites with On Location Tours.

Grab a photo with Taylor Swift, One Direction, Lady GaGa and countless others at Madame Tussauds New York.

Ripley's Believe It or Not! Odditorium brings people of all ages face-to-face with the world's most unbelievable curiosities. With 18,000 square feet of astonishing artifacts and exciting interactive exhibits. Here's a coupon!

Weather in New York in April

"April showers bring May flowers," the old saw goes, and you can expect to pay some rain dues this month in New York. In fact, more than half the days in an average April will see rain, although the total precipitation is actually slightly lower than what New York experiences in March. Expect the temperatures to rise steadily, from a start on April 1 with average highs of 56 degrees Fahrenheit (13°C) and average lows right at 40 degrees Fahrenheit (4°C), to highs closer to 66 degrees Fahrenheit (19°C) and lows of 49 degrees Fahrenheit (9°C) by month's end. Days are getting longer, with about 8 hours of light. The heaviest coats can safely be left behind, but you’ll still want to pack some outerwear, with sweaters, jackets, and—of course—rain gear. Snow is a longshot by this point in the year. All the great restaurants, museums, galleries, and bars in New York make it easy to entertain yourself indoors, but the odds are you'll have at least a couple of fresh spring days to enjoy the early blooms, and the city's parks coming back to life. The thermostat is turning up here in NYC as summer is approaching on June 20th. Since the COVID-19 pandemic began, people are paying more attention to their gut health than ever. Studies show we have up to 1,000 species of bacteria in the human gut microbiome weighing as much as 2–5 pounds (1–2 kg); each of them extremely important in determining your current and future health status[1]. Since 70% of your immune system comes from your gut, here are my five gut healthy tips to stay healthy this summer. This week's breaking news is the Governor's announcement that when New York reaches 70% adult vaccination most COVID restrictions will be lifted. In as little as two weeks we could be done with capacity restrictions, social distancing, cleaning requirements, health screenings, and contact tracing. The city is changing so quickly already but this will accelerate it. 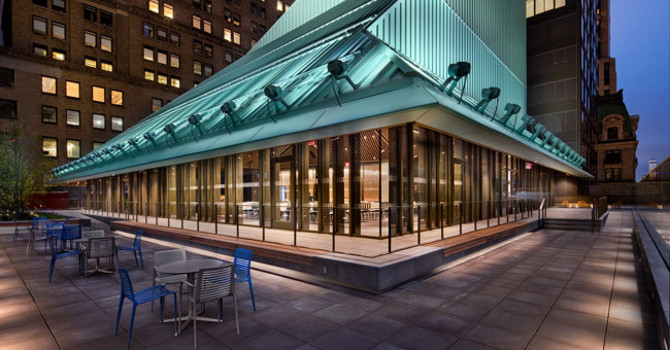 Travel was up, way up, this Memorial Day Weekend. The forecasts didn't keep people off the roads or out of the skies, and if you were up by the Met you saw a snaking line that was the longest its been for ages. Traveler confidence is way up as well, trending back to pre-pandemic levels. The city expansion continues, too. Hotel Tax Holiday and Other Tourism News for NYC

Mayor de Blasio announced a three-month tax holiday for NYC hotel stays starting June 1st. All the more reason to expect a resurgent tourism sector in the weeks ahead.

A Blueprint for Women’s Civic Engagement in New York City: A Panel Discussion at Women Creating Change on 6/15/21

Join Women Creating Change on Tuesday, June 15 at 1PM ET as they host a panel discussing the state o